The pleasant hours you will spend in Underwater World, the breathtaking adrenaline that you will take from the Crazy Boats, the Legend of Agri Mountain that you can’t get enough of it and many more in Masal Park will be waiting for you.

In Osmaniye Masal Park, which consists of thematic symbols that represent Turkey's seven geographical regions, a historical architectural work or a piece of natural beauty from each region is added to the park’s theme. At the same time indicating that Turkey is surrounded on three sides by seas, there are pools representing the Mediterranean, Black, and the Marmara Sea.

Around Osmaniye Masal Park, there is a parking lot with 500 cars, entrance gate, meeting place and 11 huge Turkish fairy tale hero sculptures that welcome you. Besides, there are shops where you can shop for 24 different concepts, food and beverage areas, entertainment and activity areas (such as climbing and interactive water play areas) and 1 amphitheater. 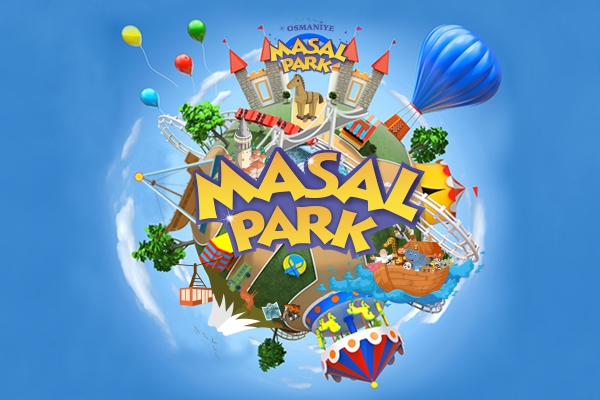 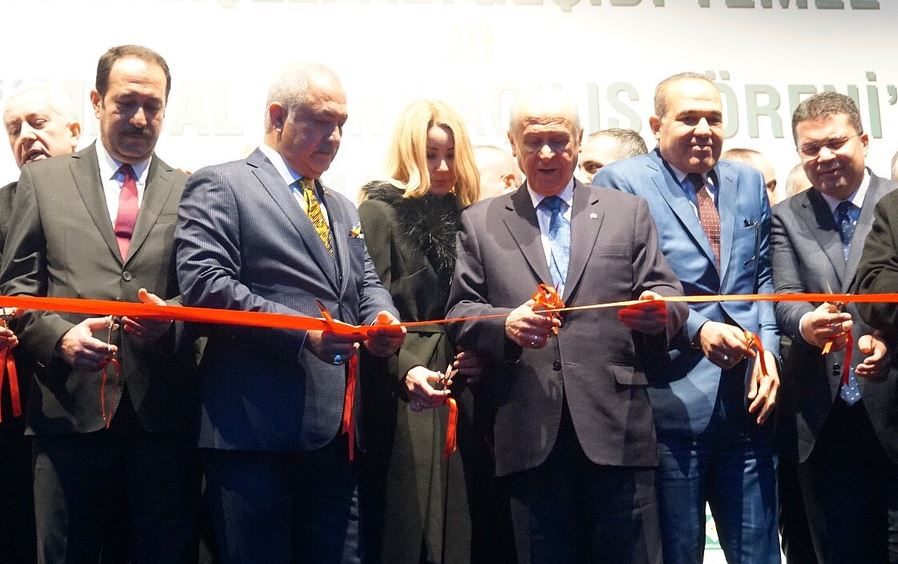 Osmaniye Masal Park is opened with a big organization of 300 thousand people that Chairman of the Nationalist Movement Party Mr. Devlet Bahçeli attended.

Masal Park, which is built on an area of 35 acres with an investment of 100 million liras, aims to contribute to the economy and tourism of the region, includes various playgrounds, opened its doors to visitors. Theme parks, being one of the most important actors of the world entertainment tourism, have also caught on in our country. The latest example of these parks that contributes to the economy and tourism of its region, is Osmaniye Masal Park. The opening ceremony was held on Sunday, January 15th with the participation of the Chairman of the Nationalist Movement Party Devlet Bahçeli, Osmaniye Mayor Kadir Kara, Workshop Communication Consultancy Agency President Burçak Güney and many other officials.

Osmaniye Mayor Kadir Kara said, "This project will be the social life center of the entire Southeastern Anatolian region, not just for the residents of Osmaniye. " "Before we started on Masal Park's project, we visited the best examples in the world and created the project that would be the most appropriate for our region," Kara said, expressing the happiness of hosting the first theme park realized by a local authority.

The Outdoor Factory, the architects of the monuments and sculptures and theme parks in many cities, founded seven years ago, reached the size of 120 million TL in the past year, will be continuing communication works with Workshop.

Outdoor Factory actualized 3D productions animating the history such as Ankara 15th July Martyrs Monument, Çanakkale Victory Museum, as well as many other projects abroad, is a company where 90 people work, made an annual turnover of 120 million TL by the end of 2017. Outdoor Factory keeps its organic growth from one side, while the company is negotiating with two German companies to become partners. One of these companies is doing the sculptures inside the horror tunnels, and the other makes the roller coasters for children. 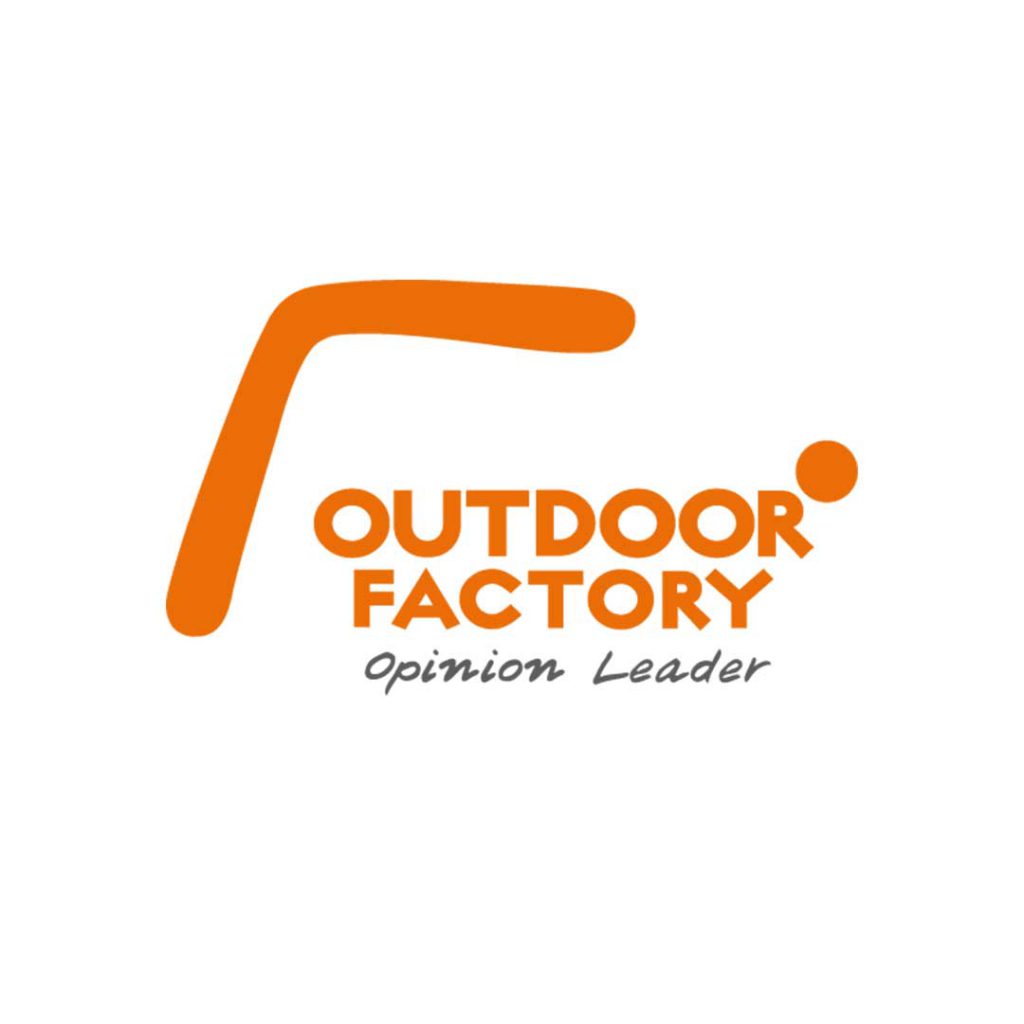 The advertising, PR, digital marketing and creative work of the shopping malls;Selway Outletin Izmir and Novada Outletin Akhisar are had in hand by Workshop.

Izmir's first outlet mall Selway Outlet with the work of renewal each day for more new brands, continues to be preferred by the shopping enthusiasts. Selway Outlet, where you can find together the opportunity options and outlets of over 100 global and strong local brands on clothing, sports clothing, perfumery, decoration, DIY store, electronics, supermarket, food, and beverages, is giving delicious shopping breaks in the eating and drinking area with its unique view of Izmir.

Novada Outlet Akhisar built by the open-air concept dominated by Aegean architecture, located on an area of 21.000 square meters in Akhisar, which is an important junction point connecting the cities around the region on the Izmir-Istanbul highway, has 1.800 square meter supermarket, 2.500 square meter DIY market with 58 national and international brands as well as a cinema, entertainment center and bowling hall.

Workshop added to its customer portfolio one of the leading companies of Turkey, Tekinalp Holding.

Workshop serving to many national and international brands on PR, event, advertising and social media disciplines, added Tekinalp Holding, one of the leading companies of Turkey to its customer portfolio.

Tekinalp Holding has gained considerable experience in the fields of manufacturing, service management, public contracts with build-operate-transfer model, direct company purchases from global players, business development through a consortium between 1980-2017, and increased and continues to increase its growth rate with high yield investments. Tekinalp Holding that pursues the purpose of continuous development and compliance with international standards in shopping mall investment and management, tourism enterprises investment and management, retail, construction, real estate and aviation sectors, adopt as a principle the success in worldwide like they had in their country.

The acceleration of commercial operations and successful business results starting in 1980, Tekinalp Group has become an important asset for Turkey and the Aegean Region. In this perspective, the company management has decided to conglomerate in 2015 to become a permanent value to our country in order to achieve the targeted boom and development in a more proper organization and a more corporate structure. 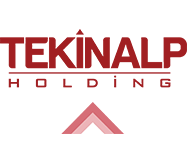 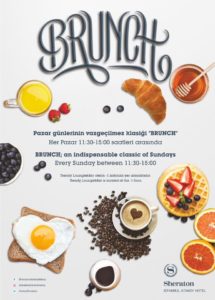 The best way to enjoy Sundays passes from a long and healthy breakfast...

Sheraton Istanbul Ataköy Hotel invites you to a brunch at the Trendy Lounge & Bar with the sea view and the garden scene between 11.30 - 15.00 on Sundays. The entertaining campaign prepared by Workshop Communication Consultancy for this enjoyable brunch attracted great interest.

The open buffet which will be set in The Trendy Lounge & Bar will be served with its rich flavors, a menu consisting of a wide range of and fresh foods and beverages...

Mussel Seller Ahmet, with more than 30 years experience in "Street Flavors" in Turkey; brings together specific flavors of unique recipes with the gourmets. He is continuing on his road from a tiny portable stand of mussels to Turkey's most popular mussel seller. Mussel Seller Ahmet's goal in the coming period is to grant a franchise to grow even more. 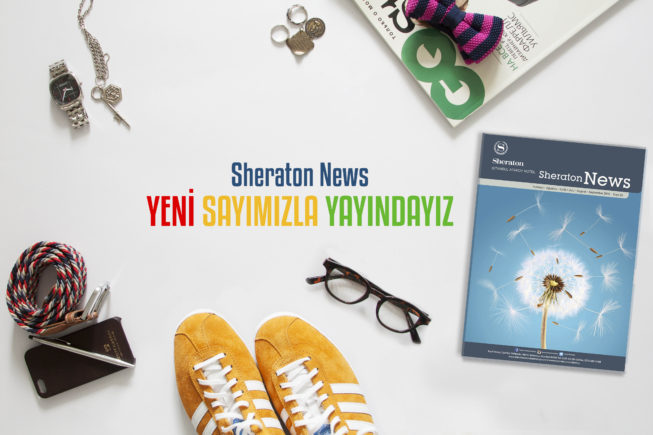 The 17th edition of the Sheraton News that we have prepared based on the colorful world of Sheraton Istanbul Atakoy Hotel is published!

The last issue with full of summer’s energy; from the Greek tavern nights to an escape for a pleasant pool in the city; from the massages that will relax your soul to a romantic weekend picnic, is full of pleasant suggestions for those who will spend their holiday in the city...

Ketchup that made a quick entry to the Turkish market with its first investment in Kusadasi after Los Angeles, Washington, Las Vegas and Dubai, decided to work with Workshop Communication Consulting for social media works.

Ketchup, located at the most active spot of Kusadasi Setur Marina, reflects the knowledge and experience of the Ketchup brand's eating and drinking trends in the world... Ketchup, which brings a unique flavor to every dish by re-introducing familiar flavors to gourmets and using daily, fresh and local products, attracts enthusiasts for very good food, very good wine program, with selection of beer and cocktails spread throughout the day… Bringing a new breath to Kusadasi after Los Angeles, Washington, Las Vegas and Dubai, Ketchup introduces gourmet delicacies to its guests with stylish decor and perfect service. 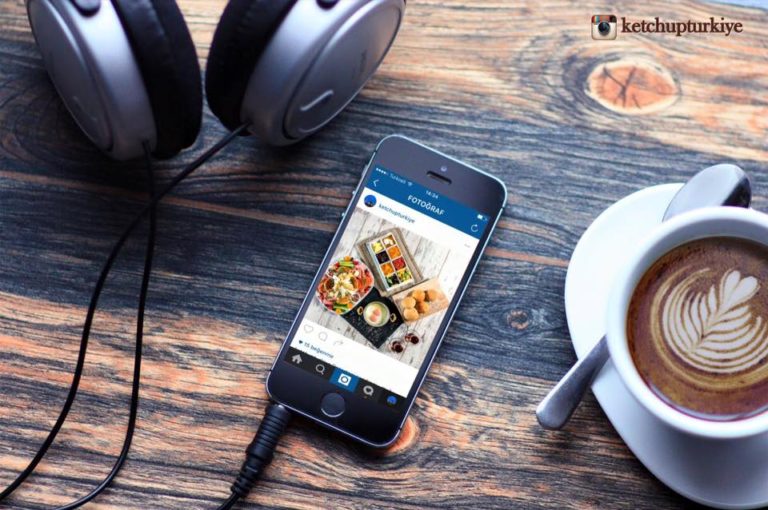 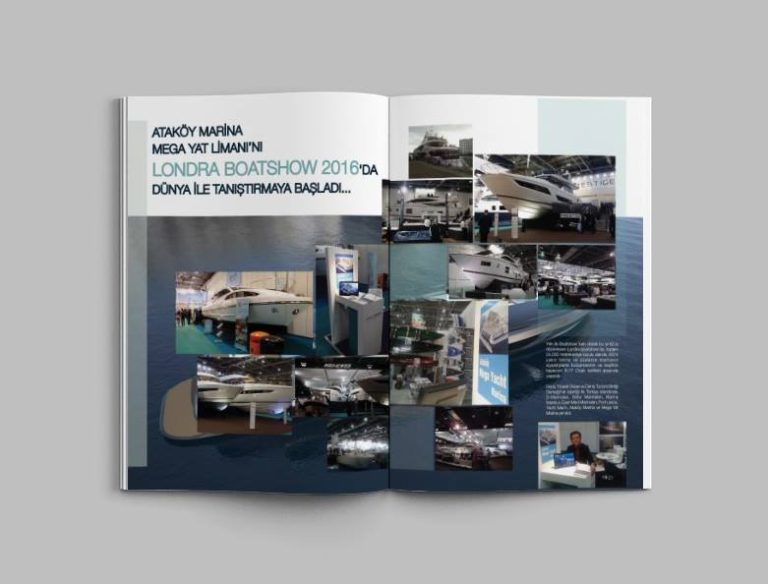 Ataköy Marina and Mega Yacht Marina are in London Boatshow...

The London Boatshow which is the 62nd organization this year is met between January 8-17 with the excitement of the discovery and meeting visitors with approximately 400 boats and hundreds of brands in a total of 24,000 square meters area. 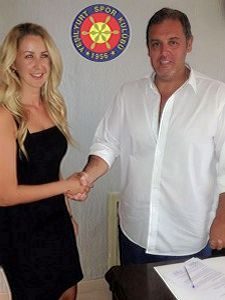 Like every year, the shopping malls are sparkling before this new year's day. The decorated pine trees and the Santas representing the classic images of the new year have already taken their place. Many organized activities and surprise gifts are waiting for the children. Of course, shopping centers' new year preparations are not limited to these.

Serving with 137 stores, Turkey's first shopping center Galleria is giving gift tickets to Volkan Konak concert held at Atakoy Marina Park on December 26 or Nuri Harun Ateş's live performance in Galleria on 28 December for those who shop over 30 TL. The Shopping Center, where the South Pole atmosphere is created, also draws attention to the global warming.

When you enter the Galleria, where the glamorous atmosphere is created with meters of glacier lights shining after sunset at the renewed facade, the natural life image in the ice attracts the attention. The representative South Pole, which is shown in three dimensions in two separate areas, has penguin colonies, polar bears, and igloos as Eskimo houses.

Galleria Mall General Manager Hasan Ardıç and Workshop Illumination Founder President Burçak Güney who implement the concept; mentioned that they started the preparations two months ago for this decoration, unlike the classic decorations, Galleria is flooded by visitors with a different and unusual concept each year. The Bear's orchestra which gains interest especially from children is also performing this year like the other New Years in Galleria.

Exporters with Workshop in the Far East Market

In order to increase Turkey's traditional export products; seedless raisins, dried apricots, dried figs and Antep pistachio, Alharal said that their application to establish "Dried Fruit Promotion Group" in cooperation with exporters of dry fruits and products in Aegean region, Southeastern Anatolia, and Istanbul was accepted. Alharal stated that the dry fruit sector is a source of living for nearly one million workers working in the business with more than 150 000 producers and that they would like to increase the export of the sector, which has the export potential of 1.4 billion dollars per year, to over 4 billion dollars in accordance with the export target of 2023. 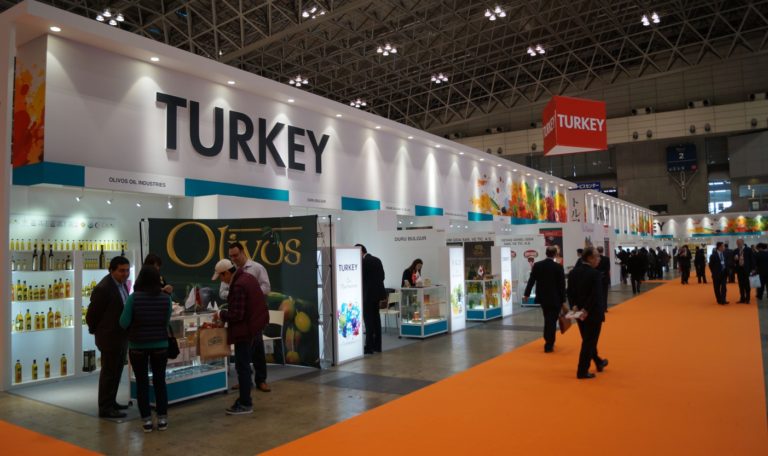 Alharal said that "Dried Fruit Promotion Group" is an important step to achieve these goals, and added: "In our 2023 strategy plan, we have gained a great opportunity to promote our products in a geographical region of 2.5 billion people, composed by Japan, China, Russia, India, and Indonesia as target markets. We will start the activities of the Fruit promotion group next year, with a source of approximately 1 million dollars. If we use the resources accurately and productively by pinpointing, we will be able to increase our dry fruit exports to over $ 4 billion in 2023."

Alharal said that in terms of export targets of dry fruits of Turkey, as well as the existing export products, it is important to increase the production of such products that have significant size in the world of dry fruit trade, especially almond and walnut; and added "In 2010, the world's trade volume of almond was 3.2 billion dollars, the trade volume of walnut was 1.8 billion dollars, and the trade volume of dry prune was 500-700 million dollars. Turkey's trade share for these products is 1-2 %. Our country should take more share of the trade of these products. While the promotional group's 2023 targets are planning, we have some requests from our government besides the things we can do. Primarily, considering the geography of our country, it is the encouragement of the plantations in the standards accepted in the world of products such as dried prunes, walnuts, almonds, apples which play an important role in the world dried fruit market."